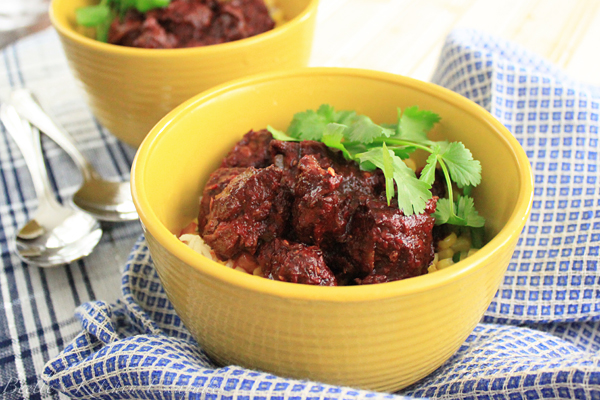 In 1966, Diana moved to New York when Paul was dying of cancer. A year after his death in 1967, Diana was urged by Craig Claiborne to start teaching and writing a book on Mexican cuisine. And thus, she traveled back to Mexico to research and unearth the traditional food of different states. Her first book, "The Cuisines of Mexico" was aptly named a game-changer since it opened America's eyes to true, authentic Mexican food. She's written a total of 10 books since then, winning awards including a James Beard Foundation award for cookbook of the year ("Oaxaca al Gusto"). She's also been awarded the Order of the Aztec Eagle by the Mexican Government for her contributions to the documentation of regional Mexican cuisine. You can read an interesting interview with Diana on The Cookbook Blog.

Now let me tell you about the dish I picked for this week by her. This Pork stew is the BEST I've ever eaten. Seriously. EVER. I am not kidding because even the hubby, who's a fussy giver of compliments, was rendered speechless by this one. Usually with every dish I make, he has something or the other to say in terms of adding this or adding that to make it better. But, for this, every time he opened his mouth to comment on any modifications, nothing came out. Instead he kept stuffing spoonful after spoonful of this delicious pork stew in silent bliss.

In my entire life, I have never been so mesmerized with the aroma of a dish while it's cooking. When you add the cinnamon-spiced paste in, be prepared to swoon. I hovered around the stove the whole time it was cooking after that. It is pleasantly intoxicating, if you ask me. This one here, is going into my book of favorites as a recipe with highest honors.

You can serve this either with rice or warm tortillas. You better get some traditional tortillas otherwise Diana may come after you with a wooden spoon since she has been known to speak out against the rise of industrial-standard tortillas. I served mine on a bed of white rice strewn with a fresh corn and tomato salsa. I give this meal 10 stars out of 5 (and no, I didn't make a mistake, I meant that). 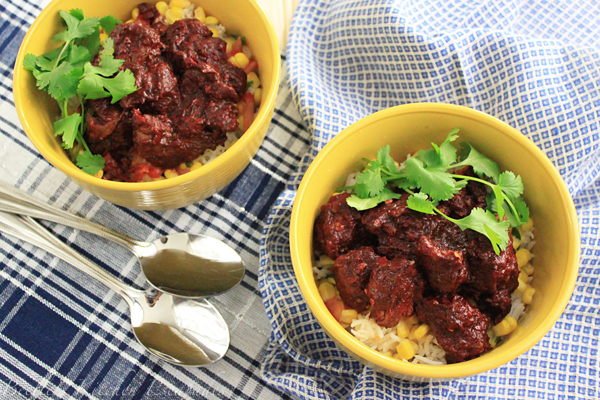 
Arrange the pork in one or two layers in a wide, heavy, flameproof casserole. Barely cover with water, and season with salt. Cover and cook over moderate heat until almost tender, about 30 minutes. Drain off most of the broth and reserve, adding enough water to make 2 1/2 cups. Continue to cook the pork uncovered until the fat has been rendered and the meat is slightly browned, about 5 minutes longer.

Meanwhile, using a small sharp knife, slit the chiles lengthwise and remove the stems, seeds and veins. Cover with boiling water and set aside to soak for 15 minutes. Drain.

Pour 1/3 cup of the reserved pork broth into a blender. Add the garlic, cinnamon, bay leaf and oregano and blend until smooth. Add the mixture to the pork in the casserole and fry for a few seconds.

Add 1 more cup of the reserved broth and the drained chiles, a few at a time, to the blender and puree. Strain the chiles over the pork through a fine­mesh sieve, pressing to extract as much of the flesh and juice as possible. Fry the pork, scraping the bottom of the pan to prevent sticking, for about 5 minutes longer.

Add the remaining pork broth to the casserole and cook over low heat until the meat is tender and the sauce is thick enough to coat the back of a wooden spoon, about 1 hour.