Rocky Mountain Brownie Cups with a hint of Kahlua 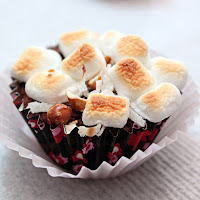 Oh yes! This is not just a rocky road, but a rocky mountain filled with bounteous chocolatey madness. You'll get a hint of Kahlua but, you won't be thinking of that when you dive into a triple chocolate wave.

I was on a chocolate high after eating one but, I couldn't get enough of it. I gobbled one as soon as it was out of the oven and inhaled another after taking photos. Hey, I can't let the poor brownie I cut into for pictures just rot away, can I?

These tasted even more delicious after a baking disaster. I was down in the dumps after a failed experiment with cupcakes. Cupcakes! I know. Who can go wrong with cupcakes? I was heartbroken that the very love of my life had let me down. Truth is, I was the one that screwed up. I tried playing around with flavors and it bit me in the rear end.

Lessons learned: 1) never EVER make frosting with ricotta cheese (I don't know what possessed me) 2) never try to right the mistake of using ricotta, with your aspirations of mixing unique flavors a la Cupcake Wars and 3) when all else fails, MAKE BROWNIES! What's even better? Make them like cupcakes if you're in love with cupcakes. 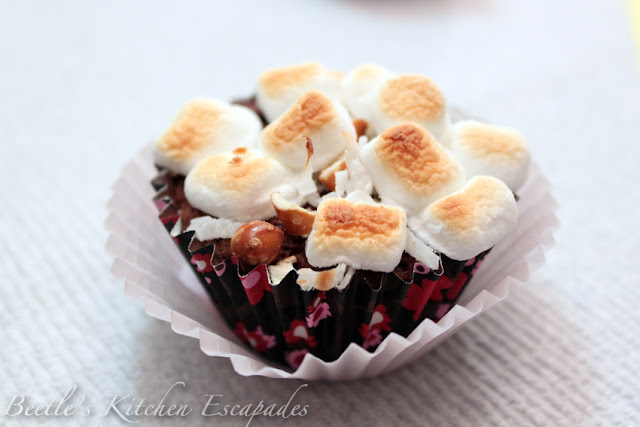 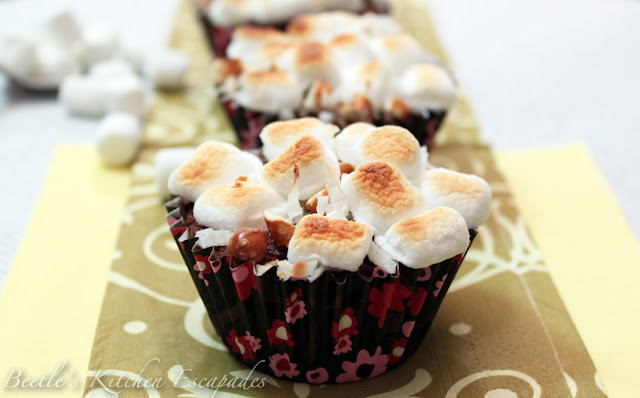 Rocky Mountain Brownie Cups (adapted from Ina Garten's Outrageous Brownies)
(Note: I made only a quarter of the original quantity in Ina's recipe and got 12 brownie cupcakes - regular sized not the mini ones)

Preheat the oven to 350 degrees F.

Melt together the butter, 1 pound of chocolate chips, and the unsweetened chocolate in a medium bowl over simmering water. Allow to cool slightly. In a large bowl, stir (do not beat - mine got a bit fluffy because I mixed mine with an excited hand) together the eggs, coffee granules, vanilla, and sugar. Stir the warm chocolate mixture into the egg mixture and allow to cool to room temperature.

Bake for 12-15 minutes (bake for 20 minutes if you're using a sheet pan like regular brownies), then rap the cupcake tray against the oven shelf to force the air to escape from between the pan and the brownie dough. You know it's done if a toothpick comes out clean. Do not overbake!

Once your brownie cupcakes are out of the oven, change the setting to broil, preferably at low.

Mix together your topping ingredients and sprinkle evenly over all the cupcakes. Put it back in the oven for a minute or two till the marshmallows turn light brown. Watch it carefully because the marshmallows burn in a second. Mine nearly did in less than a minute when I set the broiler at high. 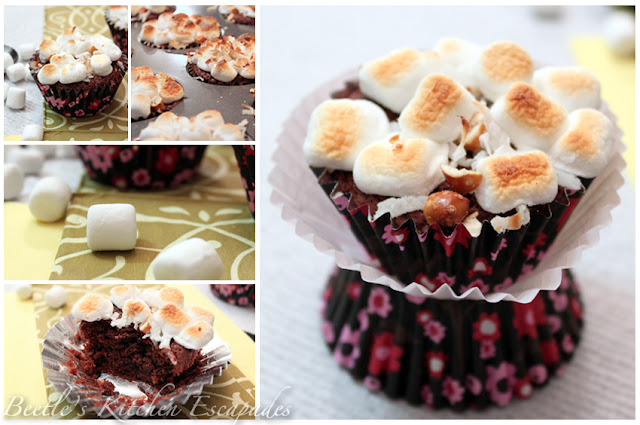