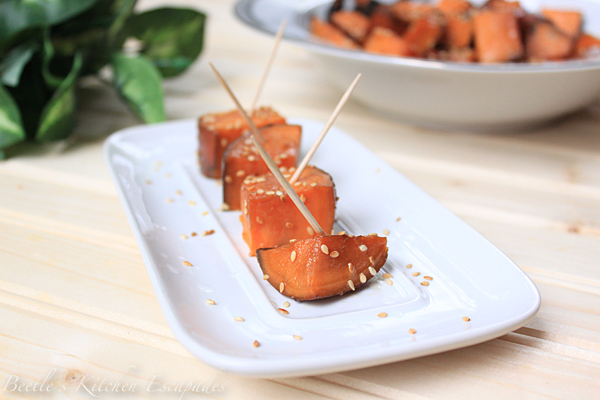 I know I'm not a child, but, I unconsciously went into my own mode of Spring Break - ending up with a Blog Break. I haven't blogged in over a week and somehow it was good to take that break. I did miss blogging and not catching up on a lot of my favorite blogs. I will be getting to all of them this weekend and I apologize for not being there all this while. I did something for my blog during this period though - I bought my own domain name! :D It's not a big deal but it felt like my home got a face lift. And over the next week or so, I'll be tweaking some design stuff too. But next week's going to extremely busy, with Easter coming up and a lot of choir commitments during Holy week, so let's see. It's going to be fun!

For now, I'm getting back to my blog with the 50 Women Game Changers Series and we have one of the culinary world's leading experts in Japanese cuisine at #41 - Elizabeth Andoh. Though she's not of Japanese heritage, Elizabeth's heart and home have found their place in Japan for over 4 decades now. How she ended up in Japan happens to be a "happy accident" as she puts it. She was born in America, grew up here and studied in New York and the University of Michigan. While she was a student here, she learned of this unclaimed scholarship to Japan and took it thinking it would be interesting. So, in the mid 60s, she landed in Shikoku in rural Japan, where she later met the love of her life. Overcoming the initial cultural shock, she grew to love the place and all of Japanese culture and food. She learnt a lot from the Andoh family during her initial years - Senior Mr Andoh was the one who first took interest in teaching young Elizabeth how to speak Japanese and his wife was an inspiration when it came to food and matters of the kitchen. Her mother-in-law was a vegetarian much like the people born in the late 19th and early 20th century in Japan - Elizabeth later dedicated a book on Kansha cooking, inspired by this.

Having developed a deep interest in the philosophy and art of Japanese cuisine, Elizabeth enrolled at the Yanagihara School of Traditional Japanese Cuisine in Tokyo. Shortly after, she launched her own culinary arts program in 1972, called A Taste of Culture. The program hosts tasting sessions, market tours, cooking classes and workshops for foreign tourists and expats who are interested to learn the intricacies of Japanese food and cuisine. She has since been the greatest advocate for Japanese cuisine among english speaking chefs and cooks.

She's also an author and journalist. She's been Gourmet Magazine's Japan correspondent for years, contributed to the New York Times Travel section and has written series for several leading english publications in Japan. She's also penned several cookbooks such as Washoku: Recipes from the Japanese Home Kitchen (nominated for a James Beard Foundation award), Kansha: Celebrating Japan's Vegan and Vegetarian Traditions and KIBO (Brimming with hope): Recipes and Stories from Japan's Tohoku (her culinary tribute to the region of Japan hit by the earthquake, tsunami and nuclear accident in 2011). What's interesting about her cookbooks is the style of her writing. Her passion truly shows in her detailed explanations of the different cooking styles, understanding of each ingredient and tool, besides the recipes she shares.

For Elizabeth, I chose the candied sweet potatoes because it sure did intrigue me. The soy sauce adds a lovely flavor to the candied potatoes. And the roasted sesame seeds give the soft potatoes a nice crunch. I loved it and made it into a snack. Because I can eat them through the day! I substituted Japanese sweet potatoes with regular sweet potatoes and regular sesame seeds in place of black sesame seeds. I wasn't going on a wild goose chase just to find the exact ingredients. I work with what I've got. :) But, if you get the American sweet potatoes, be prepared to cook them a bit longer than the recipe calls for. Enjoy! 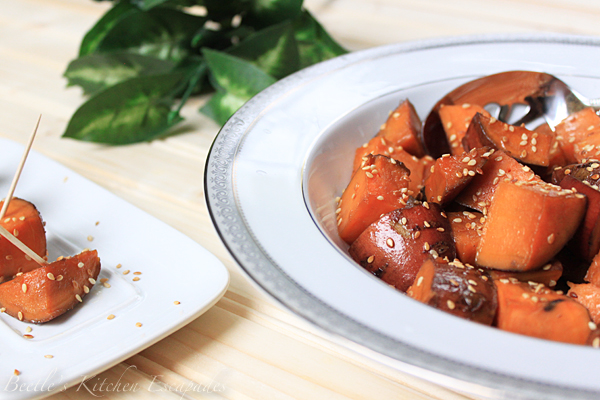 Ingredients and instructions:
Combine the sugar, vegetable oil, water, soy sauce, vinegar, and salt in a skillet just large enough to hold the sweet potato chunks in a single layer. Place over medium-high heat and bring to a simmer. Arrange the sweet potatoes in the pan in a single layer and cover with a circle of parchment paper (I used regular baking foil) to keep the surface moist. Lower the heat to maintain a very gentle simmer and cook for 2 minutes. Cover the skillet with a lid (keep the parchment or foil in place) and cook for another 2 to 3 minutes, or until the potatoes are tender. A toothpick inserted into the thickest part of a piece should meet no resistance. If the chunks are not yet tender, add a bit more water and simmer for another minute or two. Check to make sure the sugar doesn’t burn.

Once the potatoes are tender, remove the lid and parchment and jiggle the skillet to allow the potato chunks to roll around in the rapidly reducing glaze (the vinegar, by the way, will keep the sugar from seizing after the glaze has cooled). After 6 minutes or so, the water and oil in the skillet will have separated and most of the water will have evaporated, enabling you to remove the lightly glazed sweet potato chunks with little or no oil clinging to them. 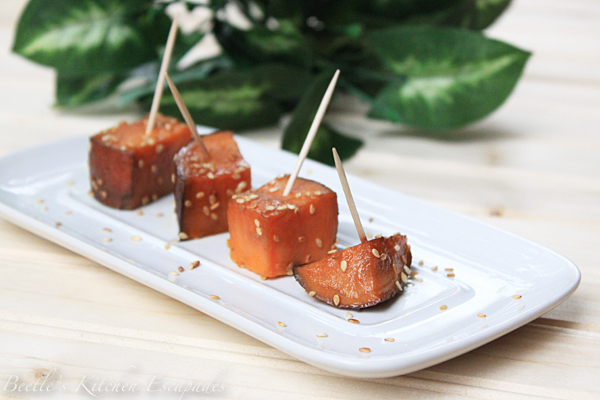