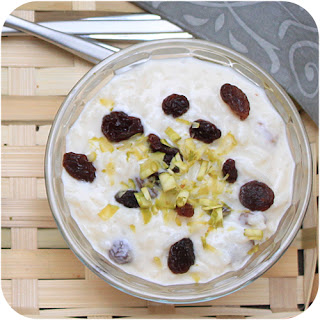 There are now two things I love from Ireland - Boyzone (yes, the boyband...stop shaking your head!) and this super-awesome rum raisin rice pudding I discovered on the St. Patrick's Day menu suggested by Food Network. What's even better about this rice pudding? It's by Ina Garten. That means automatic inclusion in my book of favorites.


Since we just passed St. Paddy's Day, I decided to partake in some Irish edible goodies with a side of Boyzone for a mini Irish weekend. You're not allowed to judge. Or else, I'll throw a Ronan Keating doll at you. Not that I own one. But, I will carve one out of a potato for said task. That'll make it an authentic Irish doll. Ha! *cough* Really bad joke.

I must tell you about my history with Boyzone though, since they were one of my first few celebrity crushes (not counting this Indian actor who I told my mom I wanted to hug when I was 8 or 9 years old). I don't like any of their recent songs but, I still love the albums they released in the late 90s and early 2000s because I spent days and nights obsessing over them. Listening to them now brings back memories from my teen years and I can't help but laugh. My brother would go round the bend when I used to listen to them since he hated boybands and Pop in general. He'd make fun of them all the time and say mean things. You know how I've got my revenge? A lot of people say HIS 3-month old son looks like ME when I was a baby. Mwahahaha But, obviously this is good news for my nephew since he's inherited my good looks. ;) 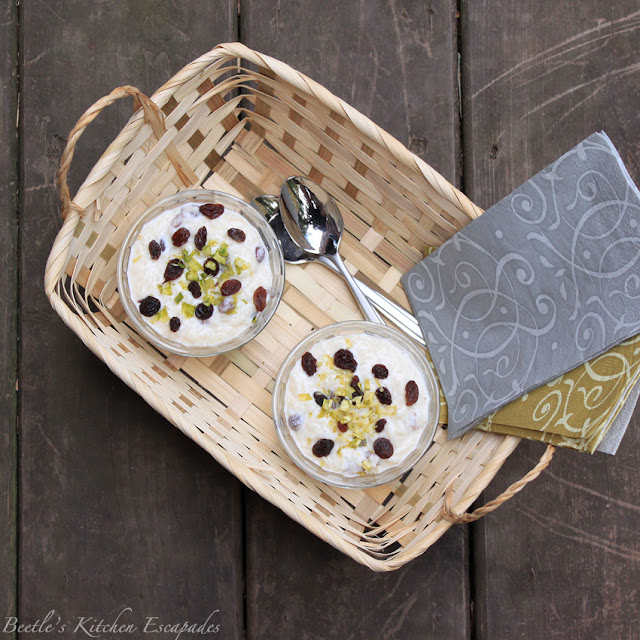 So, for my Irish weekend, it made sense to have them croon for me in the background while I made this finger-licking rice pudding. The aroma that wafts through the kitchen right from the time you add the milk+cream to the cooking rice will make even my brother dance to Boyzone. 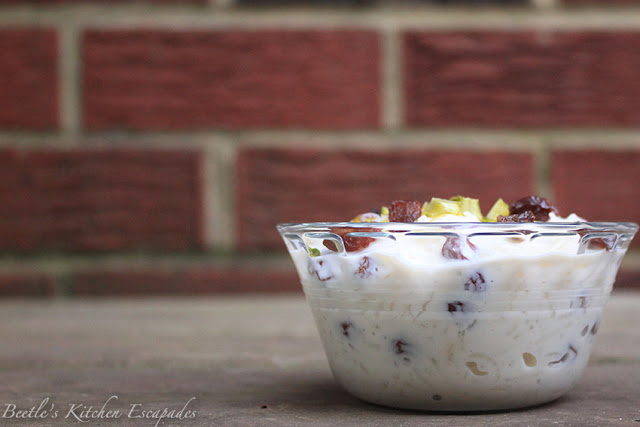 I made a few substitutions to the recipe since yours truly forgot she didn't have eggs and half & half but, was too lazy to make a grocery run. I don't think my substitutions affected the taste though since it still was yummy as hell. And having grown up with a mum who made rice pudding (the Indian kind which is very similar to this), I know this was just fine. Here are my substitutions:

This pudding went very well with Boyzone. And I'm sure it goes perfectly with anything. It would be even more splendid if I could share a bowl with Ronan. I'm also willing to bet you won't be able to stop indulging in this creamy goodness! 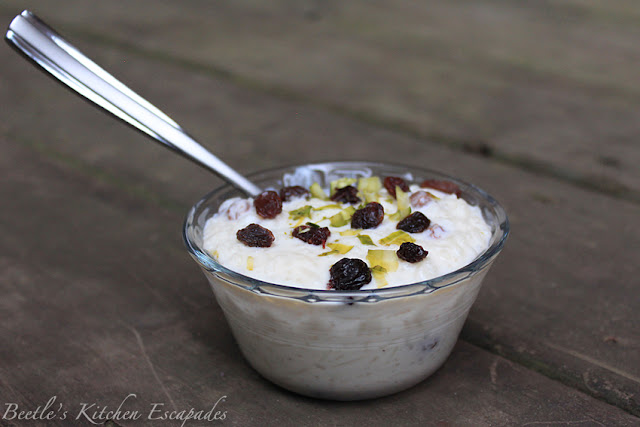 In a small bowl, combine the raisins and rum. Set aside.

Combine the rice and salt with 1 1/2 cups water in a medium heavy-bottomed stainless steel saucepan. Bring it to a boil, stir once, and simmer, covered, on the lowest heat for 8 to 9 minutes, until most of the water is absorbed. (If your stove is very hot, pull the pan halfway off the burner.)

Stir in 4 cups of half-and-half and sugar and bring to a boil. Simmer uncovered for 25 minutes, until the rice is very soft. Stir often, particularly toward the end. Slowly stir in the beaten egg and continue to cook for 1 minute. Off the heat, add the remaining cup of half-and-half, the vanilla, and the raisins with any remaining rum. Stir well. Pour into a bowl, and place a piece of plastic wrap directly on top of the pudding to prevent a skin from forming. Serve warm or chilled.