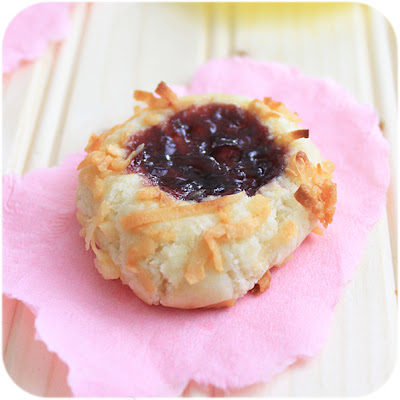 I am thrilled beyond belief that this week at #39 we have Ina Garten. Yes, THE Ina Garten. My favorite Food Network cook. For the novice cook and baker I am, Ina is an absolute joy to watch and I can sit for hours in front of the TV watching her gracefully and effortlessly pull delicious meals together. She, to me, is the epitome of simplistic elegance. When you watch her cook, you feel like there's nothing you can't do. She really does make you go, "how easy is that?", at the end of every show. Seriously. At least to me...after I've wiped off all the drool.

I secretly, Ok, not so secret anymore, wish my life would take the course hers has. Now, I know I'm not some big-shot brainiac working my way up to the White House Office of Management and Budget, like she did, but, I would like to think my humble career in PR comes close, even if it's a trillion miles away. Ina released all the stress and immense pressure she faced at work, by turning to her love of cooking and entertaining with dinner parties and soirees over the weekends and during any free time she got. On the side, Ina also indulged the interior decorator in her by buying, refurbishing and reselling homes. This also fattened her piggy bank, which would later come in handy.

In 1978, when Ina was looking for other creative outlets, she chanced upon an ad for a specialty food store on sale in the Hamptons. Curiosity aroused, Ina decided to investigate. After her visit, she made a low offer thinking the owner wouldn't really bite and that would give her more time to think about it. But, as fate would have it, the owner called the next day and handed her the keys to the shop. Dumbfounded, but thrilled, Ina bid adieu to the White House, dipped her hands into her piggy bank and took over the shop, previously called "Barefoot Contessa". Ina liked the name and decided to stick with it. That was the beginning of the story of Ina Garten, the Barefoot Contessa.

In the 18 years that followed, Ina nurtured and grew the shop into a prominent hangout that was well-known for both its style and delicacies. The store saw a lot of footfall from affluent New Yorkers and celebrities alike. It certainly caught the eye of director Nancy Meyer, who used the store as a setting for her movie, Something's Gotta Give (I need to watch this one again and pay attention now!). In 1996, Ina sold the store to two of her employees.

I was in the biggest dilemma picking a recipe to feature again this week. Although, it's understandably so since I've been lusting over a million of her recipes for the past year and have been itching to get my hands on as many of them as I can. I drooled over and over at a lot of her meat dishes but, since I'm a vegetarian for lent, I had to force my fingers to move on and select the vegetarian dishes. Nothing appealed to me there even though I was hell-bent on not doing desserts this week.

Who am I kidding? Ina week and NO desserts? That would be sacrilege. For me. I picked a simple cookie recipe. I've been dying to experiment more with cookies. So, I knew I could trust Ina to lead the way. The whole time I was baking, in my mind, I thought I looked as graceful as Ina, gliding from the counter to the oven with perfect cookies in hand. When in reality, I was quite the mess with a fog of flour in the kitchen. But, that's how I bake and I find it more exciting! 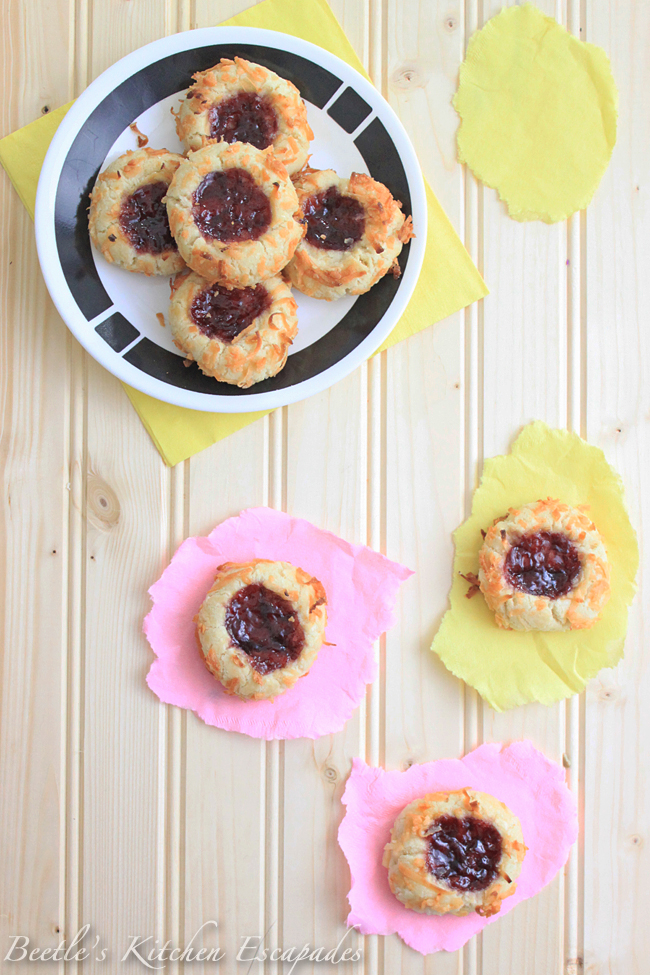 One thing I would note in this recipe is the amount of butter. While rolling the dough, it felt very slick and buttery. I felt it could've used less butter but, I don't know how that would affect the creamy texture of the baked cookie. I will try it probably with a little more than 3/4 of the butter and see how that goes. Messy experimentation for another day. For now, enjoy my faithful-to-Ina cookies. 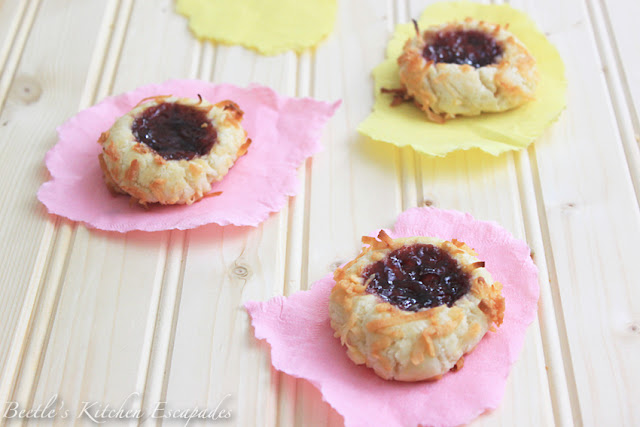 Preheat the oven to 350 degrees F.

In an electric mixer fitted with the paddle attachment (or you can use an electric hand beater like I did), cream together the butter and sugar until they are just combined and then add the vanilla. Separately, sift together the flour and salt. With the mixer on low speed, add the flour mixture to the creamed butter and sugar. Mix until the dough starts to come together. Dump on a floured board and roll together into a flat disk. Wrap in plastic and chill for 30 minutes.

Roll the dough into 1 1/4-inch balls. (If you have a scale they should each weigh 1 ounce.) Dip each ball into the egg wash and then roll it in coconut. Place the balls on an ungreased cookie sheet and press a light indentation into the top of each with your finger. Drop 1/4 teaspoon of jam into each indentation. Bake for 20 to 25 minutes, until the coconut is a golden brown.

Make sure you let them cool before you take them off the sheet, otherwise they'll crumble. Serve with tea or munch on them throughout the day. 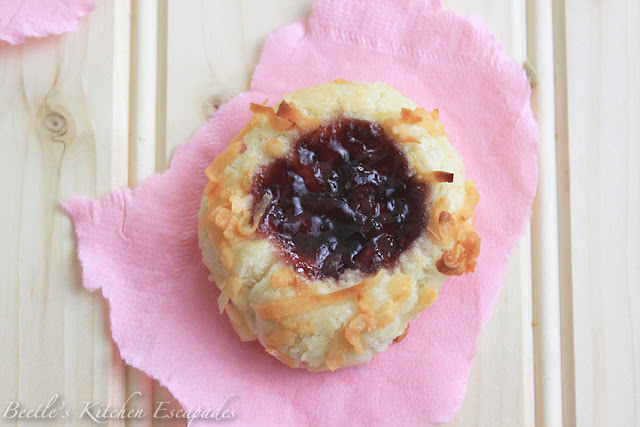 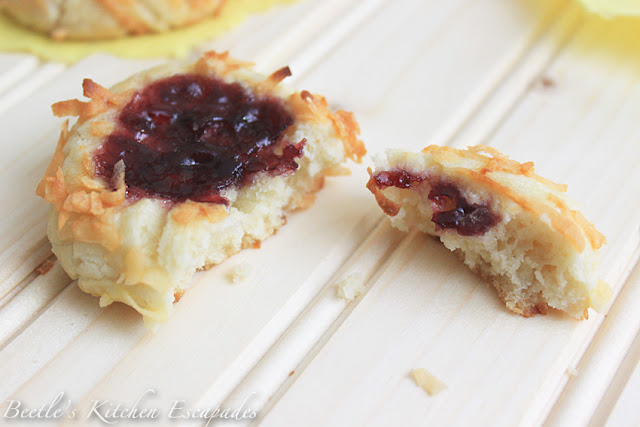